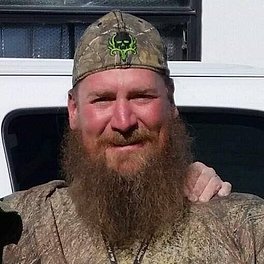 Hi my name is Larry Lowell. I'm 53 years old, and an AVID bird hunter.
Growing up our family bred and raised Irish Wolfhounds and Whippets, which we campaigned in AKC Lure Coursing, Open Field Coursing, and in the Show ring. Since the age of 12, I've trained dogs for Obedience while helping my dad condition and train for field trial competitions. I also started handling all our dogs in the Show Ring at the age of 13.

As a young adult I became an avid upland bird hunter. At this time in my life I did all of my hunting without a dog, but I would always see guys out with theirs having a lot more success then I had. So 11 years ago I decided to look for a birddog. After looking at all the different breeds, I chose the German Shorthair Pointer for no other reason than their over all looks.  I did what most people do and opened the paper, started going through the ads, and found a guy close to my house with a litter for sale. Next thing you know I'm driving home with solid liver German Shorthair Pointer female puppy. I decided to train her myself since I had a back ground in training dogs. However, this was a new area of training so I went out and bought all the books I could find, bought some training videos, went on-line to find dog training sites, bought all the needed training equipment, and then set out to train my birddog. A year and half later, through trial and error, I had my dog out hunting. I felt a great deal of pride watching her work and find birds for me. After my second season hunting with her I decided it was time to get another dog. This time I had a foundation to build from, and I knew what I liked and didn’t like. Being an avid chukar and quail hunter, I wanted a dog that ranged a little more, and one that was more athletic; to be honest I wanted a dog that was more of a natural birddog that was easier to train.

So here I go again searching for a second birddog. After doing my research a lot better this time, I found Bob and Sandy Deitering in Huachuca, Arizona; owners and operators of Huachuca Kennels. Bob is a Dog Trainer and Field Trialer, and an outstanding breeder of German Shorthair Pointers. The dogs they have produced are in the foundation of A LOT of the top bloodlines out there today, for hunting dogs as well as competition dogs. So here I am again with a new German Shorthair Pointer pup, this one a male.

When it came time to train my second pup, I thought long and hard about using a Pro Trainer, but I wanted one that was willing to teach me as well as my dog. I started looking and asking questions, and found out that I had one of the best Pointing Dog Trainers in the country living about 30 miles from my home; his name was Eldon Hongo. Talking with Eldon over the phone, I decide to send our year old puppy to him over the summer. He tells me I'm welcome to come out anytime I want to learn and help (little did he know I would take him up on it). My work schedule gave me a lot of free time since I worked a four on four off schedule. The first month Eldon had Tucker I was there 2-3 days a week. The second and third months Eldon goes to the Sierras, where he can train his Field Trial dogs off horseback. Again he tells me I'm welcome at summer camp anytime if I wanted to make the 5 hours drive up to his camp (again little did he know I would take him up on it). I packed up my wonderful wife and twin boys, and headed up to Eldon’s camp every other four days for the entire summer.  During this time I learn what a birddog was as I watched and learned from one of the top trainers in the country.  I saw first hand some of the Top Field Trial dogs in the country, dogs like: Multiple Regional and Species Champion/FC/AFC Billy Dee's Blues in "A" "Blues", owned at the time by Carl Porter; Multiple Regional and Species Champion/NC/ 2xNFC FC/AFC Slick Dixies Tarkus "Tarkus", owned at the time by David Wolf; and the AKC All Pointing Breed Champion FC Hk's Rockin Rocky "Rocky", owned by Roy Yamamoto. Watching these dogs work and run would send chills up your spine. They set the bar even HIGHER for me for what a birddog is and can be. I never thought a birddog could be like that. A dog I could Hunt as well as Field Trail. A dog that was a pure birddog that ran and handled like poetry in motion.

Before we had left for summer camp, Carl Porter bred Blues to Roy Yamamotos dog Rocky, and she had a litter of 5 puppies. Eldon told me at summer camp that Carl had someone back out on a male pup, and if I wanted him I could have him. I couldn’t get the money into his hands fast enough. That dog is my FC Blue's Rockin New Creation, call name "Neo".  This move cost me two more summers with Eldon, and one with Carl Porter after he turned Pro. This was a time that I learned how to train and handle a birddog correctly. During these 3 years I made several life long friends.

Between then and now, I've helped many people train their own dogs. I have done this by organizing training groups, hosting training days, given out LOTS of free advice, and just generally helping other hunters train their own Pointing Dogs. I've enjoyed every minute of it.

Fast forward to today, I am truly a Blessed man with God’s hand in every aspect of my life, including the directions and choices I have made. Dogs are truly my passion, and the love and drive I have for hunting, has led me to the point where I am now, A Professional Hunting Dog Trainer, and Licensed California Hunting Guide.

If I can be of help to you in making your dream come true, of hunting behind a well trained Birddog, give me a call.